Narrator: The voices you just heard are from a regular pre-primary class in rural Kenya. Only that the language of instruction is neither English nor Kiswahili, the two officially recognised languages of instruction in the country.

Teaching in Kiswahili or English is not an issue if you were in Nairobi, Mombasa, or the 30% of counties that make up urban Kenya. But for kids in the remaining 70% of counties, it’s definitely inconvenient.

Abdinoor Almahdi: Imagine walking into a classroom, you’re just like me (I only know Somali) but the syllabus is in English or in Swahili or in French or some other countries like Rwanda and Djibouti. It’s like adding insult to injury.

On this episode of Built in Africa, we tell the story of a young innovator building digital interactive apps in several Kenyan native languages, to support early childhood learning, despite locational challenges.

Abdinoor grew up in Northern Kenya, a predominantly nomadic and pastoralist region, where most of the people speak only either Somali/Kalenji, as opposed to the country’s official languages of English and Kiswahili.

Abdinoor Almahdi: And actually it is almost 80% of the landmass  of Kenya. When I say ‘Northern Kenya’, we’re talking about almost 10 counties. And it’s where actually they experience the most severe educational crisis because of the socio-economic issues we have, from famine to droughts, sometimes flooding and cross-border conflicts. And then above all, now we have a language barrier.

Narrator: A 2016 UNICEF report titled “The impact of language policy and practice on children’s learning” confirms that one of the fundamental challenges of learning in most African nations is the rich diversity of indigenous languages. More often than not, the language of instruction differs from children’s mother tongue.

Abdinoor Almahdi: Imagine telling me this is my head and then still translating it into English or French, like ‘this is your head’. So it’s like you’re translating from unknown to unknown, instead of known to unknown. I know my mother tongue, so why don’t you use what I know to teach what I don’t know? So actually the first few years of education, we struggle a lot. Some of them even drop out. Because you take more time learning the language than even actually acquiring skills.

Narrator: Fortunately, this worrying situation has not escaped the notice of the Kenyan government. About three years ago, the government introduced learning with an indegenous language into the new curriculum, such that textbooks for basic subjects were produced in Kiswahili. However because the focus is only up to the Grade 3 level, the initiative has limited reach, not to mention the generally unfavourable reception by stakeholders.

Abdinoor saw an opportunity in all these.

Abdinoor Almahdi: Actually, from personal experience, I could not even read or write until Grade 7. Grade 8 is when I started learning a few things here and there. So that’s why I went back to class, I ditched my telecommunications career. I did a masters in education technology.

Narrator: As a prerequisite to graduation, he had to come up with a technology-based project aimed at enhancing life. His idea? A fun and simple learning app that translates Kenya’s early years syllabus into mother tongues. And so, in January 2019, the M-Lugha app was created.

You’re probably already wondering, “how is an app that translates learning materials any different from translated books?”

Abdinoor Almahdi: What we are providing is an offline digital interactive content where you just see an image of a dog, you click and it gives you the English word and your local word for it. But if you give me a Hausa book and English book but I don’t know how to read and write, how are you helping me? They cannot differentiate. So the solution is interactive digital content, which has voice overs, which has animations and the kids can just interact and something like that.

In a bid to simplify navigation for the kids, Abdinoor decided against cramming all translations within a single app.

So every language and its corresponding subjects is a different app on the Playstore. Abdinoor explains the reasoning behind this seeming complexity.

Abdinoor Almahdi: This app is designed specifically for children. You know, when you design for children, you don’t give them something that complicated. You give them something they can easily navigate. For example, you give them M-Lugha Somali and the 3 apps. For them to go to the dashboard and then click M-Lugha and then go to choose the subject they want.. These are small kids. We are talking about early childhood education (ECD). You are talking about Pre-Primary 1 and 2. So that’s why we made it easy for the kids.

Narrator: As of this publication, M-Lugha supports twenty native languages, most of which are predominantly spoken by nomadic people

Abdinoor Almahdi: We are talking about Massai, Tokana, Nandi…. So most of them don’t live in a cosmopolitan region.

Narrator: So for a comprehensive study, a pupil will need not less than three M-Lugha apps, each deliberately sized around 17MB to 34MB each.

Oh, did I mention that the apps aren’t free? Yes, they each attract an annual subscription fee of 500 Kenyan Shillings (approximately $5). And in line with the offline strategy, relevant apps come pre-loaded on customised 7-inch Android tablets which cost north of $100 a pop.

Mhmmm, you’re thinking exactly what I’m thinking right now. An average rural dweller will not be able to afford this. Abdinoor is not oblivious to the fact.

Abdinoor Almahdi: My business model is working with the county governments and also the national government, NGOs like UNICEF that support education. So mostly I don’t deal with parents directly, unless they can afford it.

Narrator: Obviously, there’s a dire need for funding, but so far, Abdinoor hasn’t been able to raise any, no thanks to a regulatory bottleneck. You see, one has to get approval from the Ministry of Education before commercialising such a solution as M-Lugha.

Narrator: But things are starting to look up.

Abdinoor Almahdi: It has involved a lot of back and forth but eventually, the Minister of Education intervened. He gave them a call. He told them ‘it is a startup, how can he afford to pay 2 million shillings? Besides, he is bringing a solution, how can he even pay for his solution?’. So that’s when they gave me a subsidised rate and they started evaluating. I’m happy to say that right now,  we are at the final stages of getting approved by the ministry.

Narrator: Abdinoor is optimistic that as soon as this hurdle is surmounted, he will be able to access funds. For now, he has gotten access to aids from educational support groups and county governments. He’s also considering offering installment plans for parents.

However, a little form of encouragement is coming from urban users. While they do not need the app for basic learning, parents have embraced it as a means to help their kids speak their native language. This contributed largely to the 15,000 free downloads recorded during the pilot test.

Although he is riding solo at the moment due to shortage of funds, Abdinoor enlists a number of professionals in app and web development, animation, and translations on a gig basis.

All these do not discourage Abdinoor from having lofty plans for his product. He wants to extend M-Lugha to countries with similar languages like Botswana, Rwanda, South Africa, Somalia, and some parts of Ethiopia.

The startup also has plans to deliver standalone translation apps to these locations on request. All these should be possible with the right partnerships with telcos, NGOs and education support groups.

Shezlong: Anonymous mental health services from Africa to the world

FULL TRANSCRIPT Narrator: Mental health in Africa is often misperceived, leading to the stigmatisation of people with mental health issues. Because of this, those in need of treatment usually put it off. The cost of therapy doesn’t help either. On this episode of Built in Africa, we put the spotlight on Shezlong, the first mental health-tech solution in the Middle East and North Africa (MENA). According to a survey carried out by Egypt’s Ministry of Health in 2018, about 25 million people in Egypt — a quarter of the population — are suffering from a range of mental illnesses.  SFX: Ambulance siren.  In 2014, Ahmed Abu ElHaz, an Egyptian software engineer, was in an accident that almost cost him his limbs.  Ahmed Abu ElHaz: I had a severe depression after the accident and I wanted to go to a therapist to recover. But unfortunately, in Egypt, and similarly around Africa, it’s very difficult to find a good therapist.  Narrator: Given his previous background as a consultant with the World Health Organisation on mental health, Ahmed decided to build a platform to tackle the problem he faced. Ahmed Abu ElHaz: I thought about how we can connect licensed therapists with anybody having mental disorders in a convenient, private, and anonymous way.  Narrator: Ruminating on how to tackle the problem, he considered stigmatisation, misconception, contradictions, and religious stance on mental health disorders, and concluded that online was the way to go. Ahmed Abu ElHaz: The online therapy, definitely, it’s more convenient than clinics in different ways. The first thing is the people. It’s easier to share their emotions and share their thoughts in their houses, rather than going to the clinics. Narrator: And so, in 2015, Shezlong was born as ...

Build the money of the future at https://currency.techpoint.africa/ Image by WorldSpectrum from Pixabay Please subscribe, share and drop a review of this podcast, by searching for ‘Built in Africa’ on Apple Podcasts, Google Podcasts, Spotify, iHeartRadio or wherever you get your podcasts. You can also email us feedback at [email protected] For more stories on startups and innovation in Africa, please visit techpoint.africa ... 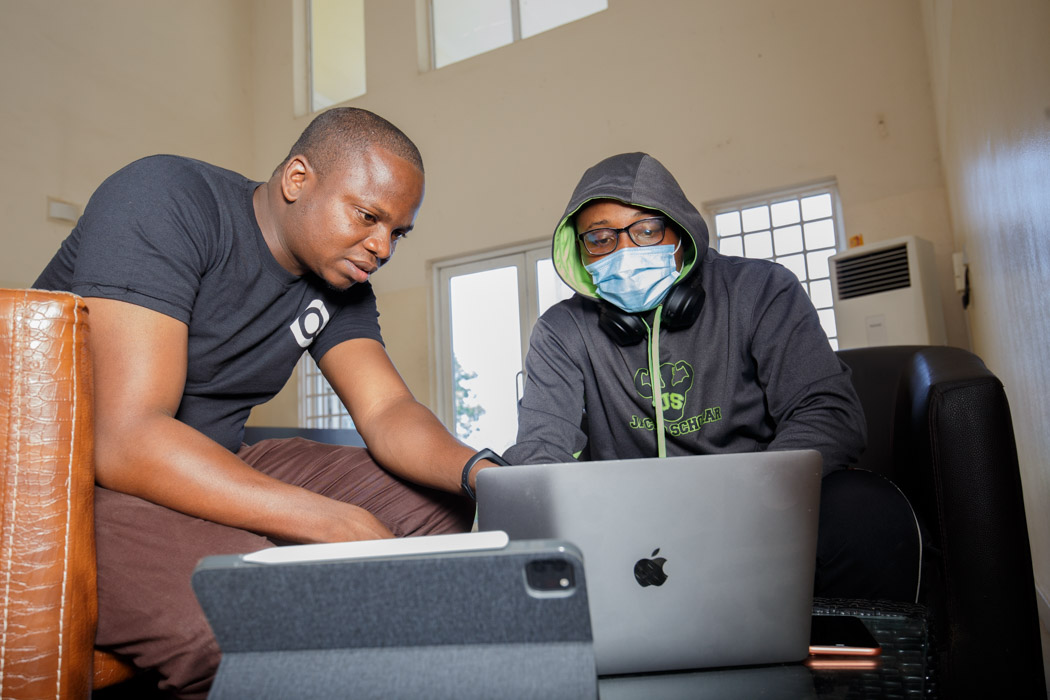 TalentQL: Building a pipeline of quality African talent for the world

This episode is brought to you by PureVPN; a secure, fast, private, and unrestricted way to access the internet. FULL TRANSCRIPT Narrator: Africa!!! Home to 1.25 billion people, over 60% aged 25 and below. With such a youthful population, it is no surprise that potential talent abounds, especially in cutting edge sectors like tech. And with thousands of tech companies already established and hundreds more coming up, quality is brewing every day. Over the past decade, a variety of tech talent companies have sprung forth on the continent, with the primary aim of connecting said talents to local and international clients. Names like Lagos and San-Francisco based Andela and Ethiopian-based Gebeya come to mind. But for Adewale Yusuf, ex-publisher of Nigerian-based tech publication, Techpoint Africa, these names were just scratching the surface. More work needed to be done. On this episode of the Built in Africa, we put the spotlight on how Nigerian-based startup, TalentQL, wants to build a pipeline of quality African talent for local and international companies. Adewale would better appreciate the intricacies of the market in 2018 when Techpoint Africa held its first African tech talent meetup in Europe. This was done in partnership with US-based seed accelerator, Techstars. Majority of the people in attendance were software engineers who originally plied their trade in Africa but now led dev teams in Berlin and other parts of Europe.   Adewale Yusuf: From the developers that came, one thing I realised is, the only thing Africa has to offer the world is talent. Narrator: That’s Adewale Yusuf.  Inspired by the quality of talent present, he made up his mind to ...