On this episode of Built in Africa, we take a look at how Y Combinator-backed Eze Wholesale is altering the global landscape of the used smartphone market.

Narrator: In 2017, two friends, one a software engineer, and the other, a petroleum engineer, saw an opportunity. They became wholesalers in the used smartphone market currently valued at a whopping $46 billion.

They operated this business for over two years before they eventually realised that the used smartphone market had more issues than they thought. This problem gave birth to an entirely new business.

On this episode of Built in Africa, we explore how Y Combinator-backed Eze Wholesale is altering the global landscape of the used smartphone market.

David Iya and Joshua Nzewi are childhood friends, and they ran a couple of businesses together up until they got into the university.

By 2016, Joshua had become a petroleum engineer at Shell while David had worked as a software engineer with two US-based Internet companies.

One day, David called Joshua telling him about a business opportunity he had in mind:

Joshua Nzewi: So one day he called me the scan the arbitrage opportunity between buying phones locally and selling them online. And that’s what brought us into that.

Narrator: Having run businesses before, it didn’t take long for the two friends to kick this off. They did this for two and a half years but soon began to notice a trend.

Joshua Nzewi: For about two and half years where we were just trading devices, buying them from individuals and selling them overseas. Until we went to trading conferences where we realised that there are inefficiencies in the market at a much higher level where companies are moving a billion dollars in devices a month. And realising this was not just a problem in the United States but also abroad as well. So the channels in which people are able to source these devices and then resell them.

Narrator: So in January 2020,  they built Eze wholesale to try to solve this problem.

Joshua Nzewi: So we created this online marketplace that would enable people to transact a lot faster, with more security and safety, and transparency, and much more efficiently than people are currently trading now.

Narrator: Globally, the used smartphone market is valued at $46 billion, and in markets like Nigeria, it has continued to grow in importance. The International Data Corporation (IDC) predicts that used smartphone shipments will exceed 330 million units with a market value of $67 billion by 2023.

Here’s how this process works.

Ben lives in the UK and uses an iPhone X. But, he’s tired of it, so he walks into a carrier store and drops it off. The carrier store then auctions the iPhone X and other phones that have been dropped off to wholesalers.

The wholesalers are tasked with the responsibility of effective distribution to those who need them. And this is why weeks later, Tobi buys that iPhone X in Nigeria for much less than its original cost.

As a B2B platform, Eze Wholesale allows traders to place, buy, and sell used smartphones. Sellers can post the devices they have in stock, and then buyers can buy directly from them via the platform.

For Eze wholesale, the aim is to open up the market for all and eliminate the middlemen in this space.

Joshua Nzewi: What we’re trying to do in this space is open the market up, so that anyone can trade in it confidently, and reduce the number of middlemen that exist in the market. Because of the inefficiencies in the way people trade, seven to nine people will touch each and every device before it’s sold to the end consumer. That’s a lot of value lost along that supply chain, and we want to reduce that as much as possible.

Narrator: So how big is the problem they’re trying to solve, really?

Joshua Nzewi: It’s big business in Nigeria but it’s big business in just about every single country, even the United States. So a lot of the companies that deal with acquiring these devices, through the various means, buy and then resell. They sell at cost or below cost just so they can continue reselling. This is just because of poor distribution channels and not having a good enough network to get all the devices out there.

Narrator: Apparently, it also affects buyers too and a number of people have fallen victim to fraudsters and have lost thousands of dollars.

Joshua Nzewi: On the buyer end, individuals are weary to trade just because of the risk involved. So typically, when you do a transaction, the wholesaler will ask for the full payment to be sent upfront. And so that leaves a little room for the buyer to dispute the transaction or get some protection. So (if the wholesaler says) “I have devices, wire me the money upfront then I’ll send you the phones,” so you wire someone the money but then you never receive any device.

Narrator: To mitigate this situation, Eze Wholesale operates an escrow system to handle payments and limit fraud, and a rigorous inspection process to verify the quality of the items.

Narrator: Although Joshua won’t state a figure, he says Eze Wholesale takes a cut from each transaction done on the platform. And in the last 12 months, the startup has processed $10 million worth of devices.

In March 2020, the 19-man team got accepted into US-based accelerator, Y Combinator, raising $150,000 in the process. Joshua recounts how YC has benefited his company.

Joshua Nzewi: I think YC helped us from a business stance. From knowing which customers to double down on to build the business. They also gave us access to a lot of resources that helped with our development stack and the internals of the business, such as setting KPIs, using the right sales methods and tactics. So from a fundamental business level, they definitely helped us quite a bit. But really everything in the industry, we’ve had to figure out ourselves.

Narrator: Although Joshua likes to think of Eze Wholesale as a global product due to its presence in markets like Dubai, Hong Kong, Mexico, and Ukraine, he believes one of the platform’s biggest markets will be Nigeria in the long run.

However, it hasn’t been an entirely smooth ride for the startup trying to navigate the West African market.

Joshua Nzewi: I guess the biggest problem we’ve encountered is trust. So getting businesses to trust us, trust our platform. And by that I mean sending the money to us first. That’s been the biggest thing, especially as we started to reach out to companies in Nigeria. They were asking, “why should we trust you? How are we sure that you’re not trying to scam us in this market.” So I think that has been the biggest component that we’ve struggled with; getting people to trust us.

Narrator: Consequently, Eze wholesale is trying to build up trust, little by little.

Joshua Nzewi: One way is we’ll do sample orders with people. So very small transactions where there isn’t much risk. So we start out with like one, two phones just for them to get a sense of how we operate and the timeline which they expect to receive them. And that’s been the main way. Some people have requested to meet in person, or they ask for pictures, videos… But we found that doing a sample transaction is the best way to go about it.

Narrator: So what does the future hold for Eze wholesale?

Joshua Nzewi: We really want to serve the Nigerian market and then expand to other African markets as well. We’ve spoken to some companies in Ghana and South Africa but this is a market that I’m sure every country is participating in and I think there’s a lot of value to be derived from the platform that we are building. So we really want to expand our footprint within Africa to serve every country that we can. We know, first hand, from doing businesses in Nigeria how much a smartphone impacts someone’s life.

This script was adapted by Emmanuel Paul

Research and interview by Tage Kene-Okafor

Please subscribe, share and drop a review of this podcast, by searching for ‘Built in Africa’ on Apple Podcasts, Google Podcasts, Spotify, Stitcher, iHeartRadio or wherever you get your podcasts. You can also email us feedback at [email protected] 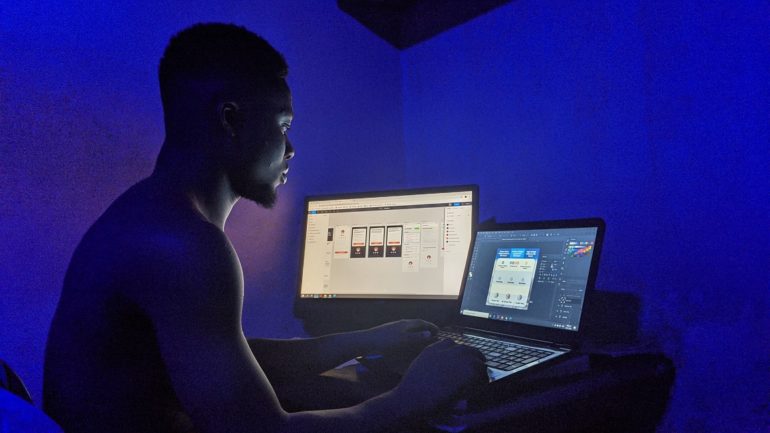 This episode is brought to you by HostGator, web hosting that scales from easy to expert. Visit builtin.africa/hostgator to get up to 60% off... Build the money of the future at https://currency.techpoint.africa/ FULL TRANSCRIPT Narrator: It is a cozy Sunday afternoon as I walk into a dimly lit...